Last month, at the Byron Writers Festival (BWF), I launched a sequence of poems commissioned by Red Room Poetry and BWF, and inspired by the festival site.  This blog post includes my reflections on the process, as well as a link to the poems and to Red Room Poetry’s website.    Excerpts from the poems were printed on seed cards, which can be planted and which will, hopefully, result in the sprouting of a Callistemon Citrinus (lemon-scented bottlebrush) whose beautiful blossoms I enjoyed watching the lorikeets devour while I was spending time at the site, waiting for the muse…..

When I stand at the top of the watershed between the wetlands and the dunes at Belongil Creek estuary and look out over the sea, or look back over the Byron Writers Festival site, I stand there as a white woman of immigrant Anglo-Celtic heritage, whose family came to Australia in the recent past to build a better life out of the ruins of trauma, war, famine and religious persecution over centuries.   It’s a common enough story, in Australia, but one that we should always remember – the hardship and trauma that drove so many people to come here.   That still drives so many people to try to come here, to build a better life, though they may well be stopped from doing so.

As I stand on that watershed, I acknowledge the Arakwal people of the Bundjalung Nation who are the traditional custodians of the land where the Byron Writers Festival is held.   I think about the ways history and colonialism have intertwined our destinies and made us citizens of the same nation.  About the opportunities for reconciliation, and the challenges.

For me, identity is only the starting point in the process of making art.   I believe it is important to acknowledge where I see and experience the world from.   I also believe it is entirely possible for imagination, art and spirit to transcend that experience, but only if we are honest and clear about the power relations and politics of that situation in the first place.

I think about all the ways these seasonal wetlands have experienced human activity and habitation since that time, both Indigenous and non-Indigenous: Arakwal land for thousands of years, then, in the early twentieth century dairy farming, sand mining, and by the 70s the land was a caravan park, then a resort and golf course before being redeveloped and restored into its current incarnation: the Elements of Byron resort and event areas, adjacent to both the Tyagarah Nature Reserve and the Belongil Creek Special Purpose Zone.

Finally, I think about the excited backpackers I see meandering over the dunes, heading towards the breathtaking sea.   How it might feel to see the expanse of the Pacific meeting the shore at this, the most easterly point of Australia, for the first time.   I get a taste of that wild-eyed wonder.   It’s infectious, and glorious, and takes me back to being a young woman travelling on my own in Israel.  Feeling all the “brackish biblical history” sweep into me, as Dorothy Porter puts it in her poem ‘Caesarea’.  That poem stays with me, and inspires one of the poems in this sequence.

So, that was my process.   When I was asked to write a series of poems in response to the Byron Writers Festival site this was what I did.   I went out to the site and spent a lot of time there over a period of months.  Acknowledging who I am, acknowledging where I stand and who has stood before me.   And then listening to the landscape.

But I want to qualify that.   Or explain it in some way.   What listening to the landscape might mean.   I don’t mean it in an overly Romantic Wordsworthian way.  As much as I respond to and love the passion of that poetry, I also see its limitations.  The unacknowledged privilege of the position of Poet, and the power relations through which that writing feminised and romanticised the land, and inspiration.  For similar reasons, I am wary of ecopoetry.  I think it’s a lazy term and a playground for a new kind of privilege and piety.  It is easy to say no one else should eat of the banquet when one is already full and sated.  I think it’s vital for poetry to interrogate all terms and discourses, not just those that are out of fashion now, like “progress”.  The terms that are hypnotic and fashionable now need our suspicion too: “sustainability” and “ecology” are just as dangerous.  That’s the work of art:  to explore and question in a deeply individual way.  And I trust only the absolutely individuated voice in art.  Not a school of thought.   Not a political movement.  Not an appeal to an overlooked identity.  Never a Utopian ideal.  Only the individual voice, questioning, circling back, ready to say the wrong thing, honestly looking and asking and offering a human response and a human presence.

Which reminds me of something Seamus Heaney said:

“Here is the great paradox of poetry and the imaginative arts in general. Faced with the brutality of the historical onslaught, they are practically useless.  Yet they verify our singularity, they strike and stake out the ore of self which lies at the base of every individuated life.  In one sense the efficacy of poetry is nil – no lyric has ever stopped a tank. In another sense, it is unlimited……in the rift between what is going to happen and whatever we would wish to happen, poetry holds attention for a space, functions not as a distraction but as pure concentration, a focus where our power to concentrate is concentrated back on ourselves.”

The individuated human presence: straining to make sense of the world and also respecting the mystery at the centre of life, then striving to communicate something of that to another individual, human reader is, I think, what makes a poem a poem.

So when I came to write these poems I started by listening to the landscape – both the outer landscape and my own inner landscape and tried to allow some kind of alchemy between the two to take place.   As well as listening to the elemental world, the plant world and the animal world I was also listening to the cultural associations and connotations I carry with me:  fairy tales, the bible, memories and associations from other landscapes I have lived in and visited, my family and upbringing, poems that I love and carry with me.  For me, that means my listening is always going to be a gendered experience.  I am very sensitive to and alert to the ways gender functions in every landscape, and one of the poems in particular explores both the strength and the violence inherent in girlhood.

The poems I have written all focus on in-between places and buffer zones.  The entire Byron Writers Festival site is a buffer zone, and I think the same could be said about Ewingsdale in general, with its wetlands and estuaries and flood-zones.   Within the site, too, I have focused on in-between spaces and niches: the dunes, an old bridge, the sedges and reeds around the lakes and a corridor through the marshland between the trees and the sea.

I would like to finish by quoting a few lines from Elizabeth Bishop’s great poem about the historical (and therefore deeply individuated) nature of all knowledge, and how that knowledge butts up against mystery in our lives:  “At the Fishhouses”.  This is the spirit in which I undertook this commission, continuing my lifelong apprenticeship to listening in the way Bishop, a great poet, listened to her inner and outer landscapes:

If you should dip your hand in,
your wrist would ache immediately,
your bones would begin to ache and your hand would burn
as if the water were a transmutation of fire
that feeds on stones and burns with a dark gray flame.
If you tasted it, it would first taste bitter,
then briny, then surely burn your tongue.
It is like what we imagine knowledge to be:
dark, salt, clear, moving, utterly free,
drawn from the cold hard mouth
of the world, derived from the rocky breasts
forever, flowing and drawn, and since
our knowledge is historical, flowing, and flown.

Thank you to Red Room Poetry and the Byron Writers Festival for commissioning these poems.  In particular, I would like to thank Tamryn Bennett, Edwina Johnson, Sally Marwood and Coralie Tapper.   Special thanks to Alastair Oakman, the Grounds and Activities Manager at Elements of Byron resort for his time and expertise, showing me around the site and answering my many questions. 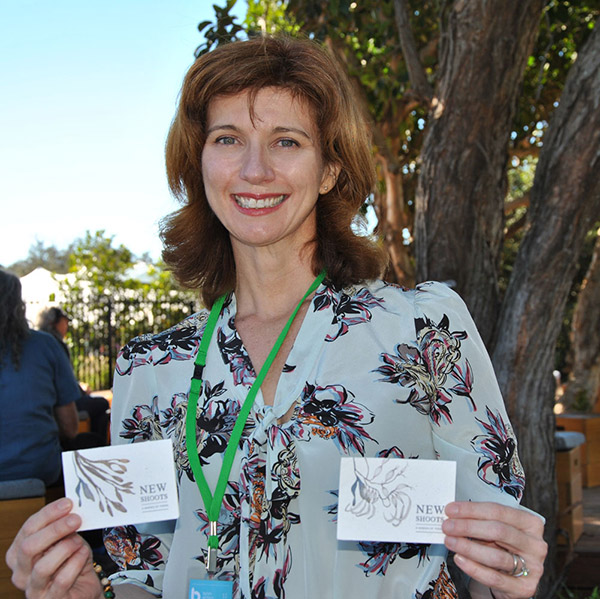 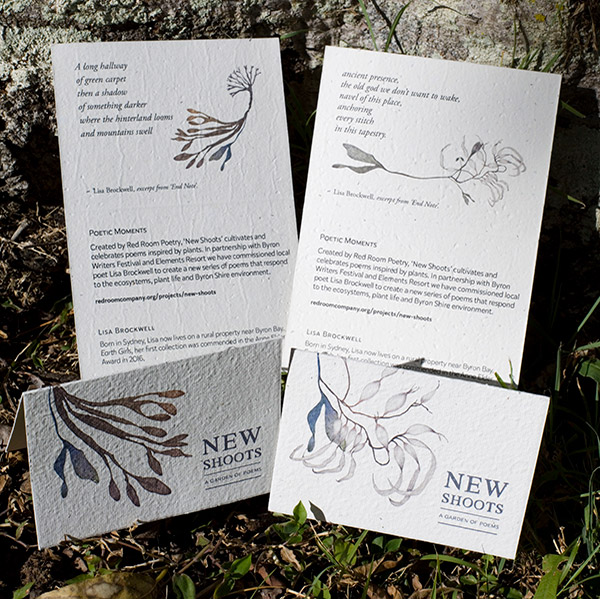